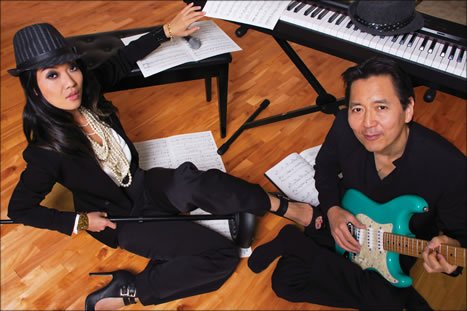 Vancouver based music duo playing current hits, classic hits, R&B, soul, jazz and more. “Music for every occasion”, Encore is the perfect choice for your next event.

Han, by the age of seven, made her debut on Chinese National TV, and just recently returned to China to participate in the Chinese version of The Voice, placing very high in the competition. She has studied with Dee Daniels and other top vocal coaches. Her voice spans R&B, blues, soul, jazz, Hip Hop, and World music which has led her to record and/or perform: duets with jazz and gospel pianist Peter Dent; lead vocals for world music performers Edgar Manuela and Tandava; and background vocals for the Juno-nominated album road to Kashgar by the Orchid Ensemble. In 2004, D’arcy returned to Chinese National TV placing seventh in the equivalent of ‘Chines Idol’, a program with almost a billion viewers.

Hailing from the Greater Toronto area, Michael played the Eastern Canada circuit for several years, playing blues, country, rock, celtic, pop, progressive rock and R’n’B. Michael played with The George Oliver Band (Mandala) Canada’s King of Soul. Through the years he has had the privilege of sharing the stage with some of Canada’s premier musicians, Domenic Triano, Prakash John, George Oliver, Doug Reily, Whitney Glan, Rik Emmet, Mei Han, Kentish Steele to name a few. Michael is an accomplished guitarist and has called Vancouver home for many years, making a name for himself in the Lower Mainland music scene.